At Taco Trio, we prepare family recipes from our manager and staff that have been handed down from generation to generation. Our menu consists of traditional recipes from various regions of Mexico. Mexicans have a variety of common popular desserts enjoyed nationwide, as well as regional specialties. There are also desserts and treats that are seasonal or associated with certain holidays.

We also offer other desserts periodically. Peppers feature prominently in Mexican cooking. Contrary to popular belief, they are not all hot.

The Scoville Scale was developed by chemist Wilbur Scoville in 1912 to rate and standardize the “hotness” of peppers. The scale is based on the amount of sugar needed to make the hotness of the pepper undetectable. 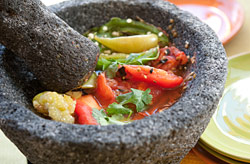 We conscientiously contribute to the local economy. We participate in South Portland Buy Local.

We support local businesses, including: